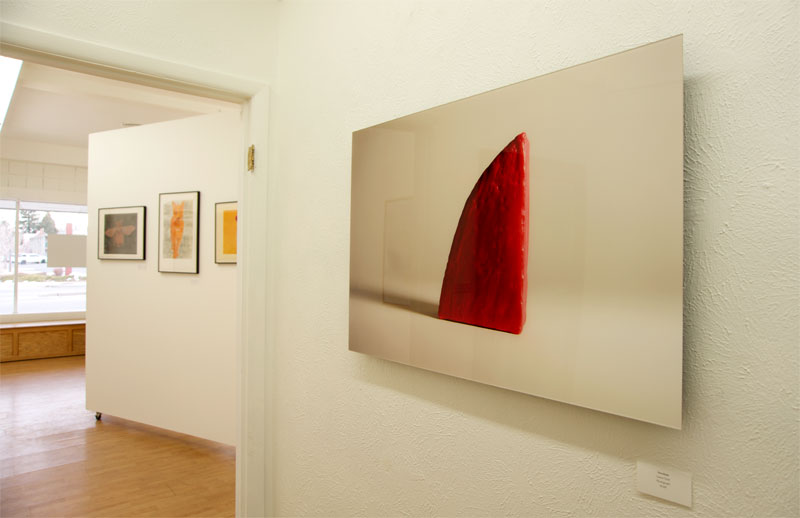 EDGE is a pleasingly rough and sweet little gallery divided into two spaces.  There is a larger, more open space in the front, and an intimate room in the back.  Starting in back looking toward the front, here is an image of my photo, Novitiate, hanging on the west wall.  The material is Fujiflex face mounted on acrylic.  In the background are three warm toned monotypes by John Horner.  (About half the pieces in Boulder/EDGE Gallery Swap, including Horner’s below, are photos or prints framed under glass.  My snapshots here don’t do them justice but are enough, I hope, to give you a sense of the show.) 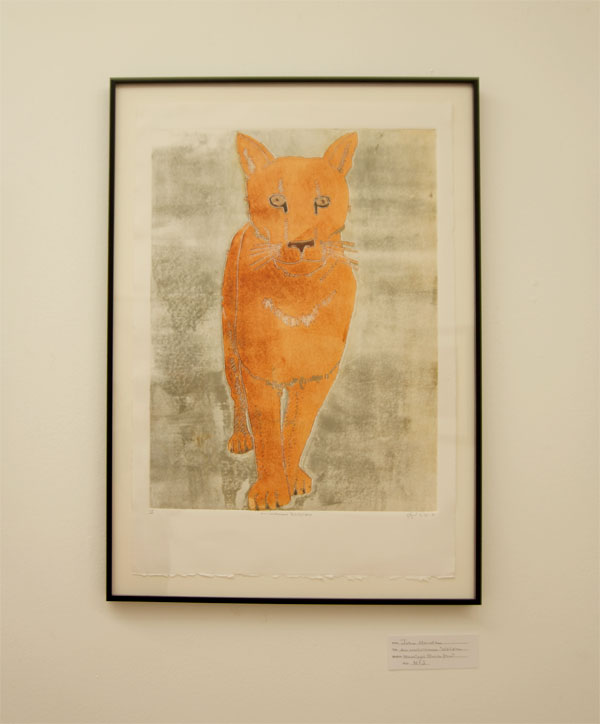 If you stand near Horner’s prints and look toward the back of the gallery you’ll see a few more of my photos (center) in the interior space.  The entry here is bordered by two paintings by Alissa Davies on the left, and two prints by Catherine Carilli on the right. 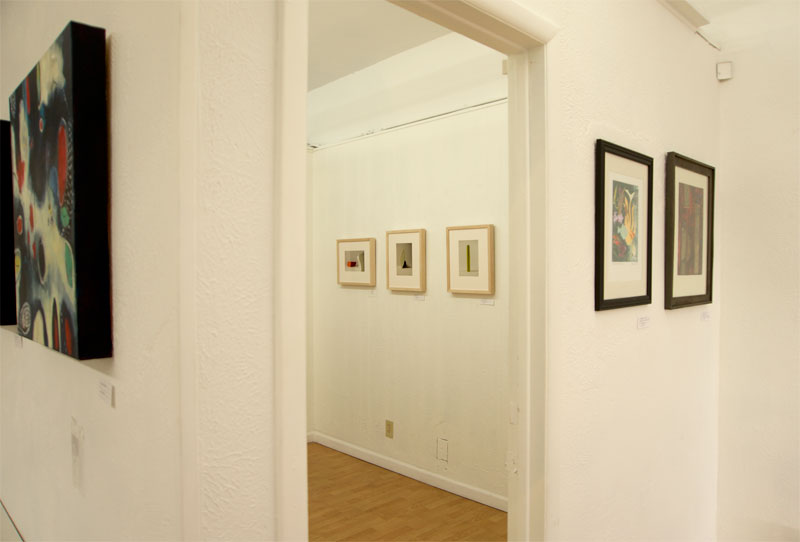 Looking toward the back of the gallery, Boulder/EDGE Gallery swap.

Here’s a closer look at my four photos in the interior room.  The material is, again, Fujiflex and the prints are framed under museum glass.  (Thank you, Mercury Framing.) 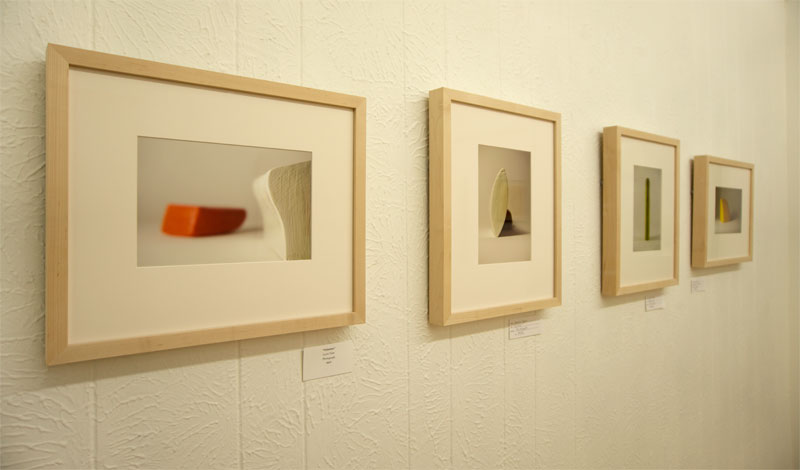 On the wall to the right of the image above is this expressive oil painting by Catherine Carelli titled “Mystic Portal.” 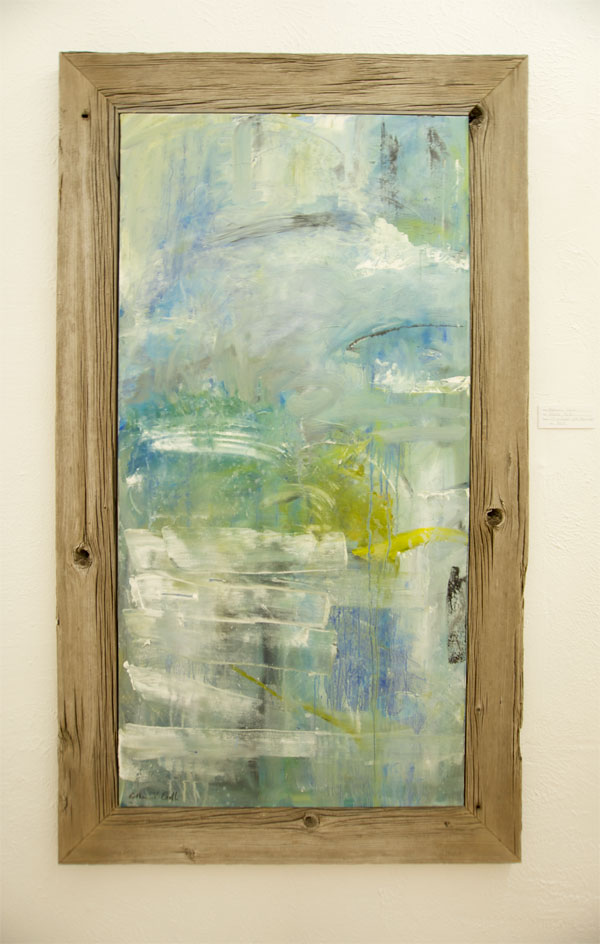 Here is a second glimpse of two of Alissa Davies’ paintings hanging near a playful mobile by Michael Deragisch, one of three kinetic pieces in the show. 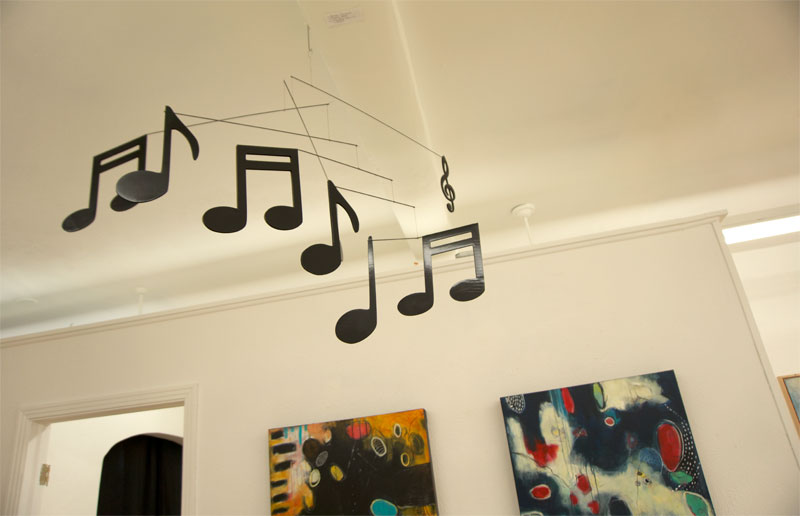 If you stand under Deragisch’s Floating Notes and look toward the front of the gallery you’ll see this third painting by Alissa Davies in bold yellow and black with red. 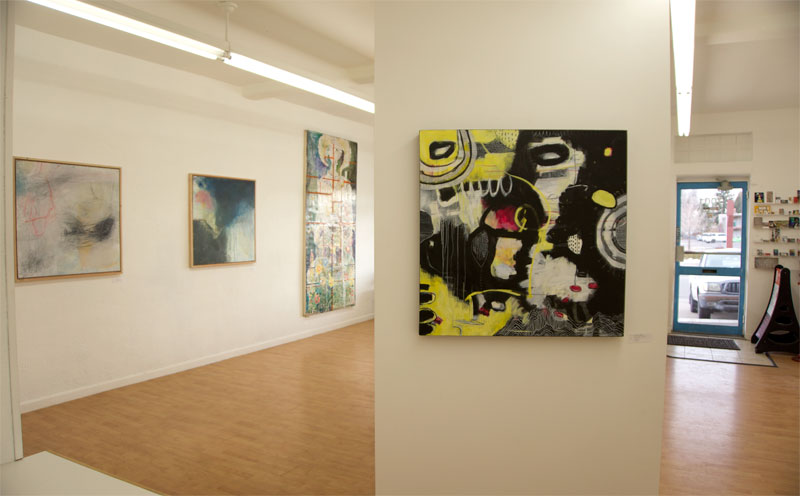 Glancing to the left are two paintings by Tracey Russell.  Like Carilli’s and Davies’, Russell’s paintings display an affinity for expressive gesture. 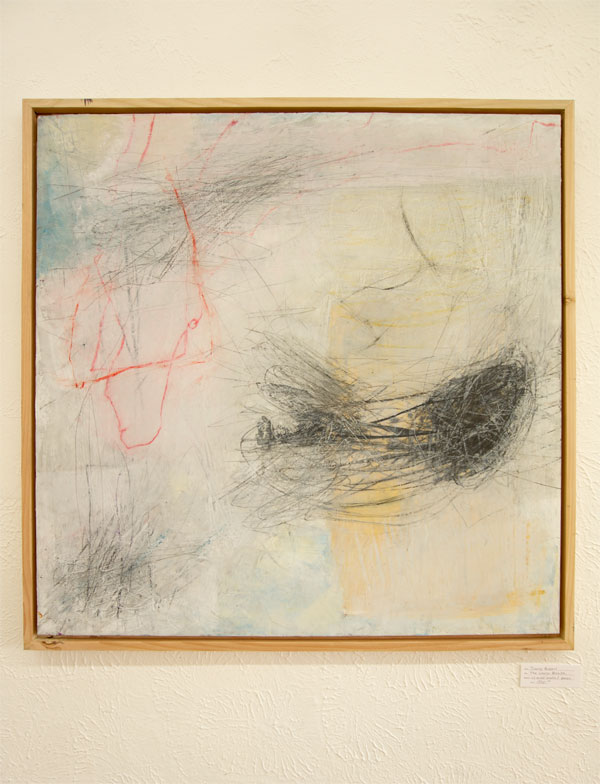 “The Warm Breeze,” oil and mixed media on panel by Tracey Russell.

This large, totemic painting by Samuel Austin hangs on the gallery’s east wall near the front window.  It’s an attention grabber.  (Check out the title in the caption below.) 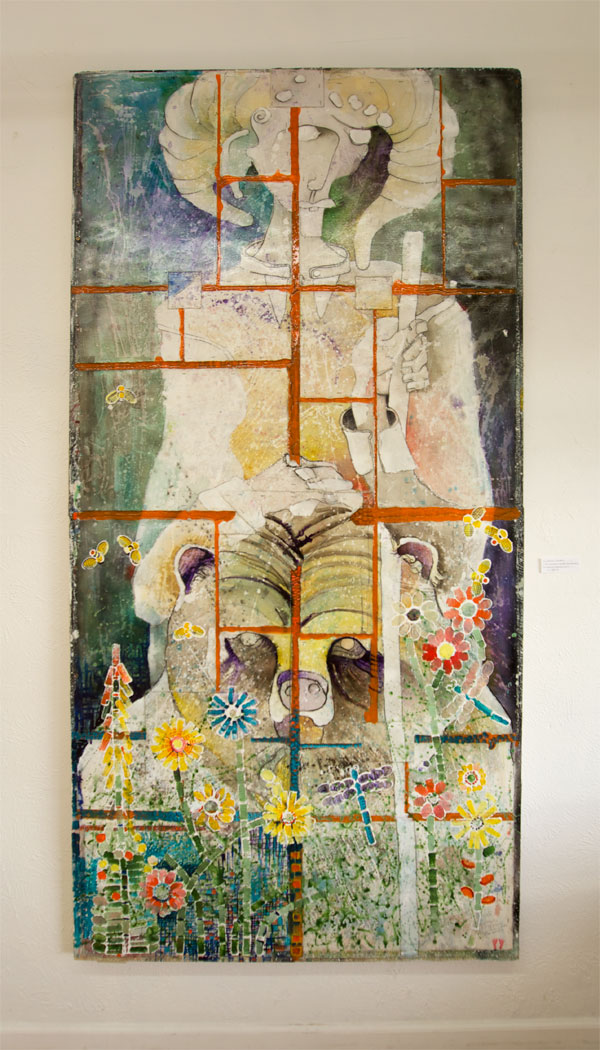 “If You’re Gonna Be a Bear Be a Grizzly,” watercolor and acrylic by Sam Austin

If you stand at the front of the gallery and look to the left/west wall you’ll see a group of four photographs by Paula Gillen.  I relate a lot with her graphic, playful, feminist sensibility.  The subjects in the three images on the right are models posing with collaged elements. 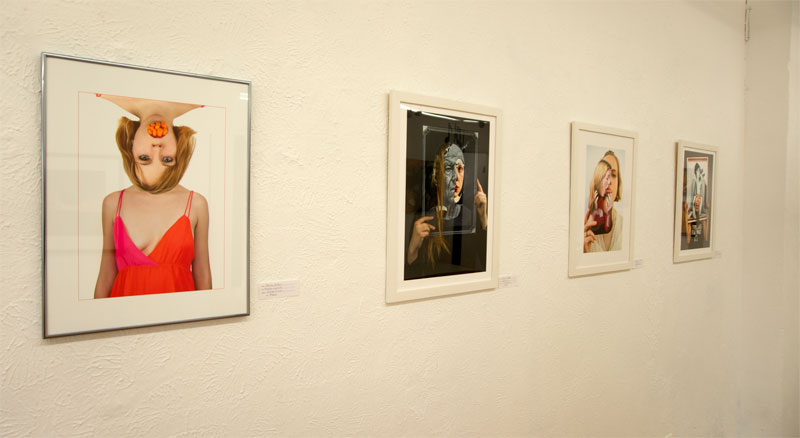 I’m sorry I failed to get good snapshots of Gillen’s photos above and Stefka Trusz’s below (due to glare) because their work is fab.  Click through to their sites linked to their names above to see what I’m talking about. 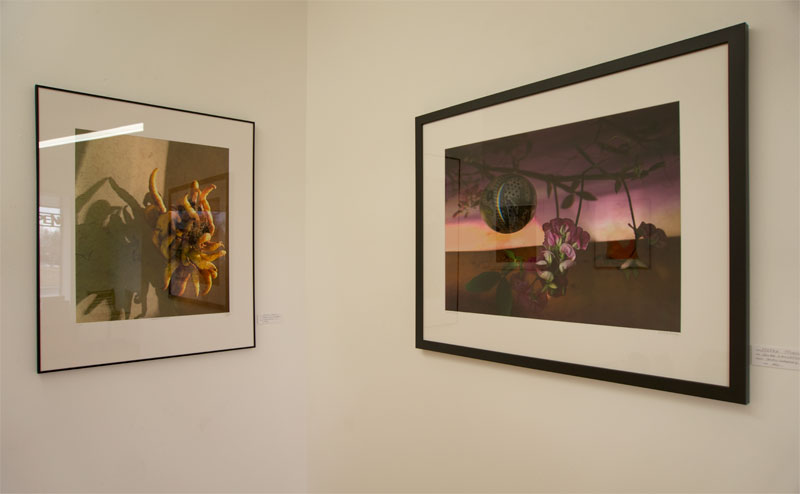 Not pictured in this post are Buffy Andrews’ layered, feminine works on the gallery’s north wall in mixed media/encaustic.  Check out Buffy Andrews’ work here.

Lakewood is a new location for EDGE having left their old location a little over a year ago due to gentrification.  The new location is easy to get to from Boulder and the gallery is sweet!  Stay tuned for EDGE artists in Boulder’s NoBo Art District later this year.

Here are three pieces of student work in encaustic made at my studio in Boulder, Colorado by three different artists.  I’m excited to share them with you because of the range in sensibility they show.  When I teach encaustic it is my goal to help artists new to the medium find their own personal way into it.  Interested?  My next workshop, Basic Encaustic, is slated for Saturday, November 19th. 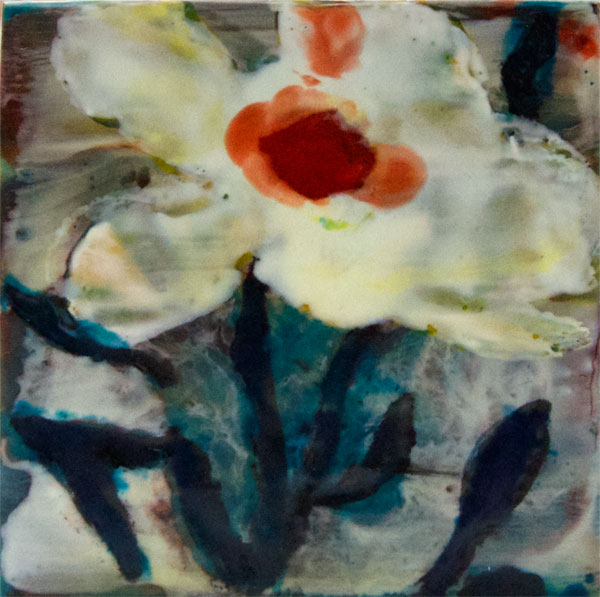 Private Lesson:  This artist came to the studio with a strong sense of subject and composition inspired by her work in encaustic with another instructor.  We worked together to fill the technical gaps in her encaustic education and she left the studio with the beginnings of a new series based on botanical imagery that showcased her intuitive, fluent paint handing. 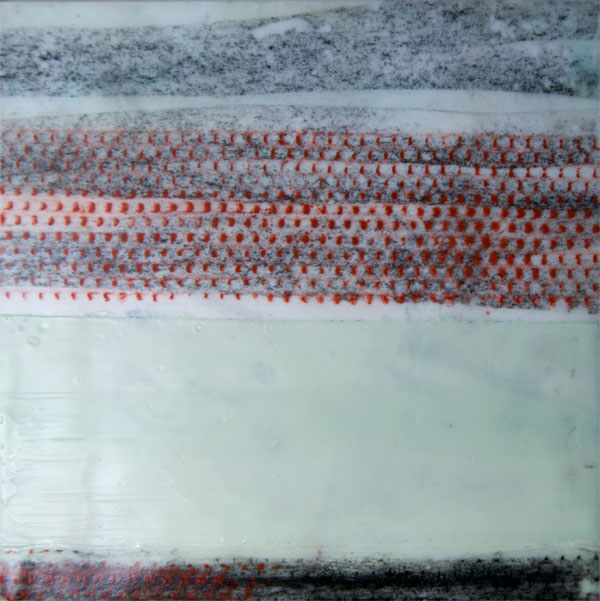 Encaustic Transfer:  The two things that stand out to me when I look at this aritst’s work are the understated palette – look how the red works almost as a neutral here – and the atmospheric approach to mark-making.  The red and black marks on this piece that appear to have been drawn on to the panel were made using encaustic transfer techniques. 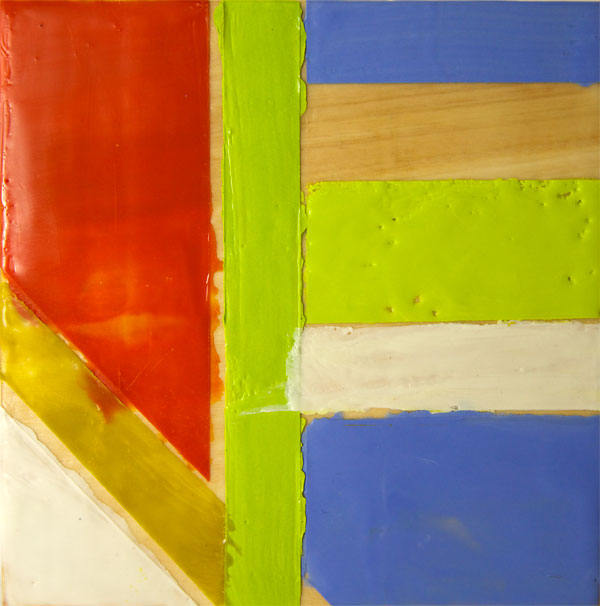 Continuing Encaustic:  Simple stencils using painters’ tape were the focus of this session of Continuing Encaustic.  I like how this artist’s firm yet organic paint handling comes through in this simple and pleasing hot/cool composition.

I add workshops to my schedule by request as my schedule allows so if there’s something you are interested in that you’re not seeing on the schedule, let me know and I will see what I can do.  Private lessons available by request.

Yay!  We have an iPad in the house and I am all over it, learning how to use Paper by 53, an app I’ve been dying to dig into since I learned about it at Tapestry in March.  Paper is a simple, intuitive drawing tool for the iPad used mainly by illustrators.  It has a ton of potential as a sketching tool for painters.  I would love to see more fine artists get into it. 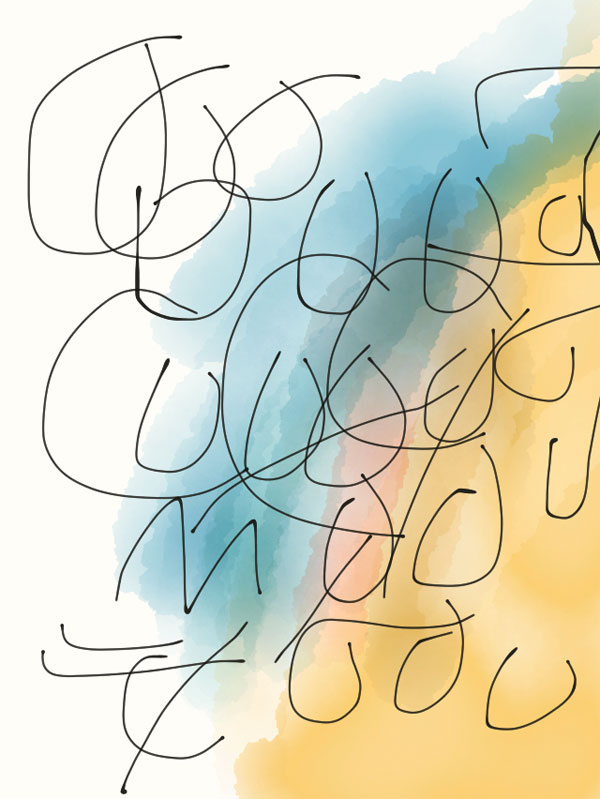 I’ve been using it for sketchnotes and to do casual sketching at home.  Here are a couple casual sketches I made of scenes from the The Knick, a TV series I like a lot. 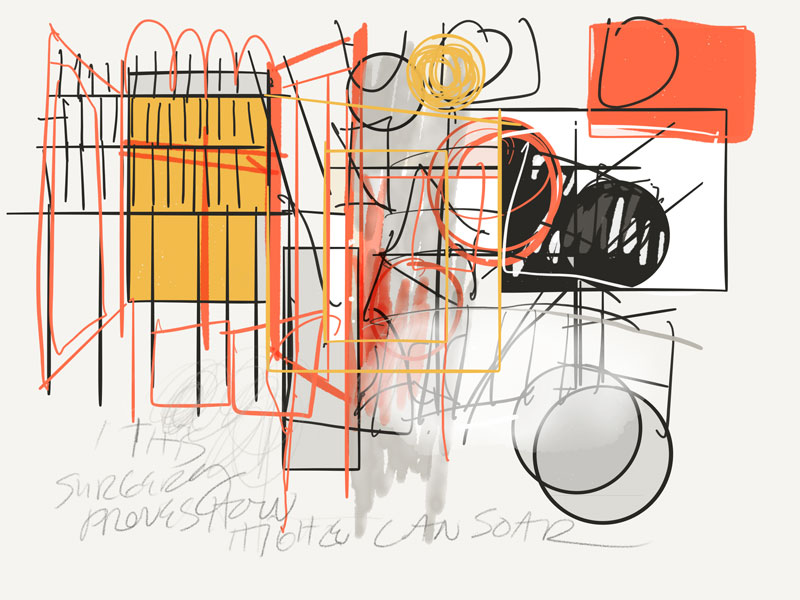 “This Surgery Proves How High We Can Soar,” iPad drawing #madewithpaper 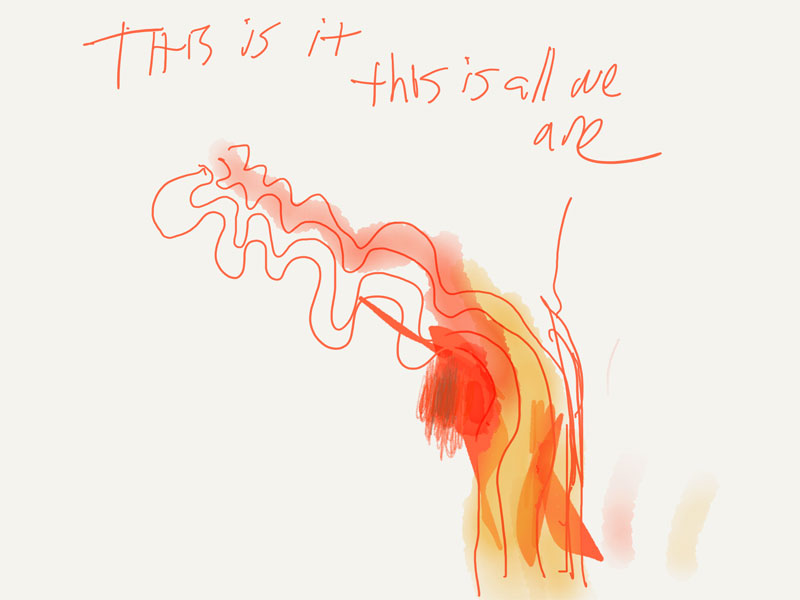 “This Is It, This Is All We Are,” iPad drawing #madewithpaper

Ready to try?  The app is simple enough for you to just download on your iPad or iPhone and start noodling around.  When you get stuck, check out this series of posts at mademistakes.  It is chock full of tips and will help un-stick you.  For more information geared toward data visualization and sketch notes, check out Catherine Madden’s website.  You may also find this free Skillshare video, How to Use Think Kit, helpful/interesting. 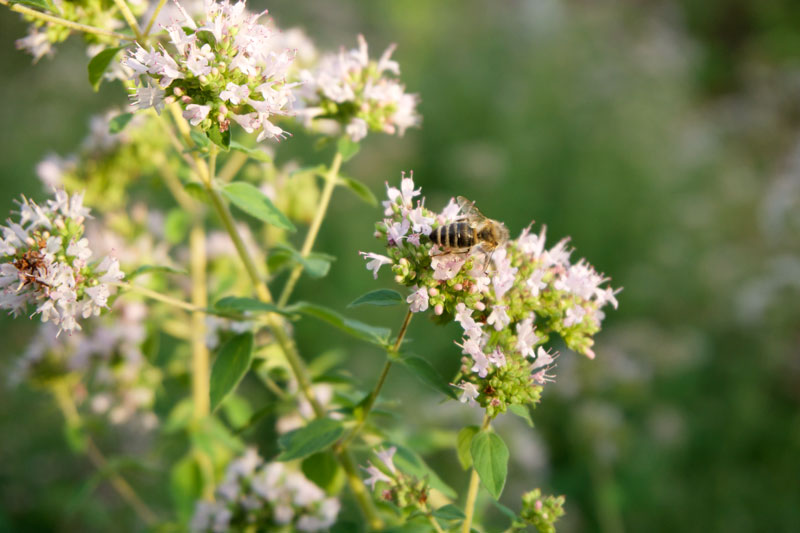 A sentimental pic of a honeybee foraging on oregano in Boulder, Colorado, July 2016 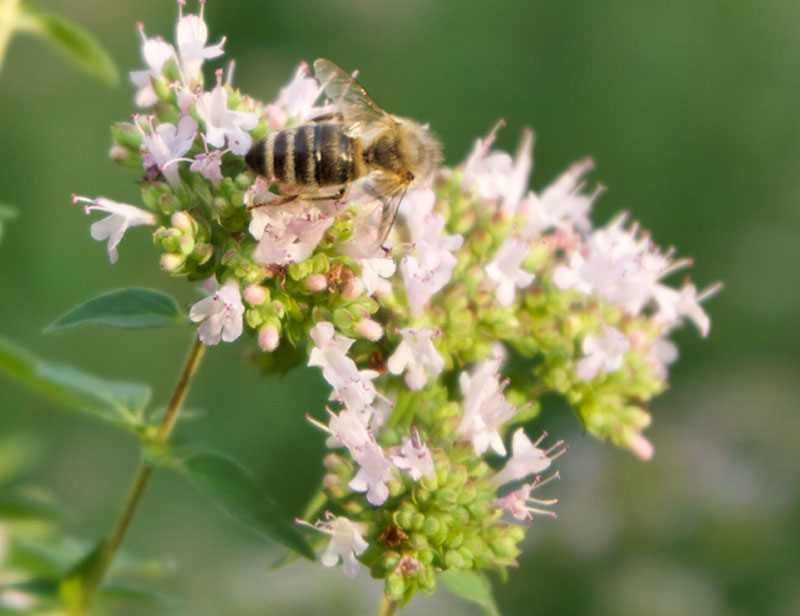 Oregano flowers and their tiny hairs are hard to see! I like how photographs can give a clearer picture of what’s happening with a plant at that smaller level.  The thing that most interests me here is being able to see how the oregano’s buds are arranged on each stem.  (That, and the tiny hairs. of course.)